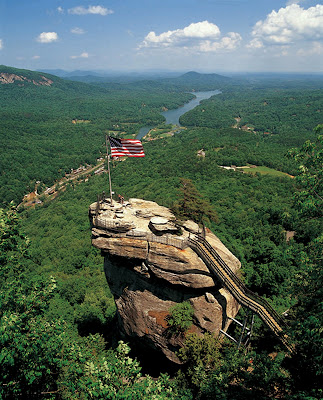 RALEIGH, NC –Described by a British traveler as “an isolated rock, looming against the sky which is of circular form, and resembles the principal turret of a stupendous castle,” the 315-foot Chimney Rock monolith remains awe inspiring today. The natural marvel is a major tourist destination, and will be recognized by the N.C. Department of Cultural Resources with a N.C. Highway Historical Marker on Aug. 3. The 11 a.m. ceremony will be at the Esmeralda Inn. The marker will be placed at US 64/74A in Chimney Rock.

Chimney Rock towers over the 14-mile long gorge in Rutherford County, in an area settled in the 1780s. Henderson County native Jerome Freeman devised a plan to build a stairway up to its summit and build a park around it in 1880, and made the necessary purchases. The stairs and a trail to the breathtaking Hickory Nut Falls, known as the “Appian Way” also were completed that year. Tourists began paying to climb to the top, including the physician Lucius Morse, who had moved to Hendersonville to relieve the symptoms of tuberculosis. The weakened Morse paid a man 25 cents to complete his ascent to the rock’s summit on a donkey. In 1902, the captivated Morse and his brothers purchased Chimney Rock in a 64-acre tract for $5,000.

The automobile age made Chimney Rock a successful tourist destination. Completion of a bridge across the Rocky Broad River and the Chimney Rock Motor Road increased accessibility in 1916. Morse increased tourist appeal when he had the river dammed to create Lake Lure, and later added an elevator, driveway and parking lot. Environmental attractions and trails were added, including a Nature Center and guided walks, and educational opportunities. In 2007, the State of North Carolina purchased Chimney Rock from the Morse family. This 1,000 acres is the focal point of the still developing Chimney Rock State Park.

This entry was posted on Wednesday, July 29th, 2009 at 8:02 am and is filed under events, outdoors, chimney rock. You can follow any responses to this entry through the RSS 2.0 feed. You can leave a response, or trackback from your own site.